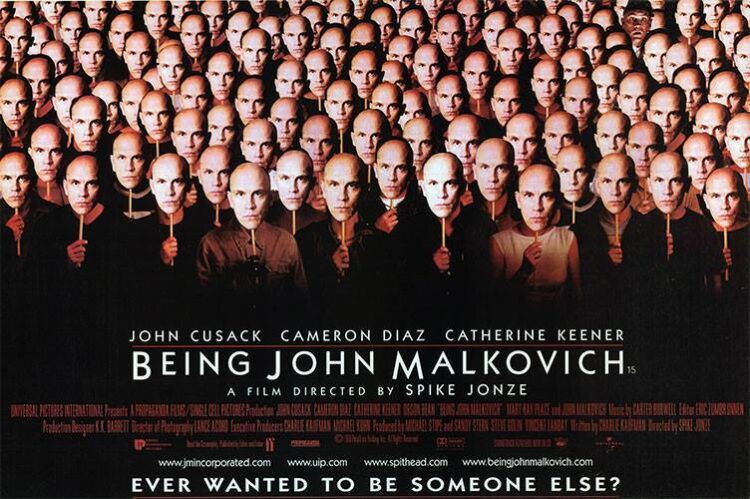 A quintessential loser, an out-of-job puppeteer, is hired by a firm, whose offices are ensconced in a half floor (literally. The ceiling is about a metre high, reminiscent of Taniel’s hallucinatory Alice in Wonderland illustrations). By sheer accident, he discovers a tunnel (a “portal”, in Internet-age parlance), which sucks its visitors into the mind of the celebrated actor, John Malkovich. The movie is a tongue in cheek discourse of identity, gender and passion in an age of languid promiscuity. It poses all the right metaphysical riddles and presses the viewers’ intellectual stimulation buttons.

A two line bit of dialogue, though, forms the axis of this nightmarishly chimerical film. John Malkovich (played by himself), enraged and bewildered by the unabashed commercial exploitation of the serendipitous portal to his mind, insists that Craig, the aforementioned puppet master, cease and desist with his activities. “It is MY brain” – he screams and, with a typical American finale, “I will see you in court”. Craig responds: “But, it was I who discovered the portal. It is my livelihood”.

The basic question is “whose brain is it, anyway”? Does John Malkovich OWN his brain? Is one’s brain – one’s PROPERTY? Property is usually acquired somehow. Is our brain “acquired”? It is clear that we do not acquire the hardware (neurones) and software (electrical and chemical pathways) we are born with. But it is equally clear that we do “acquire” both brain mass and the contents of our brains (its wiring or irreversible chemical changes) through learning and experience. Does this process of acquisition endow us with property rights?

It would seem that property rights pertaining to human bodies are fairly restricted. We have no right to sell our kidneys, for instance. Or to destroy our body through the use of drugs. Or to commit an abortion at will. Yet, the law does recognize and strives to enforce copyrights, patents and other forms of intellectual property rights.

This dichotomy is curious. For what is intellectual property but a mere record of the brain’s activities? A book, a painting, an invention are the documentation and representation of brain waves. They are mere shadows, symbols of the real presence – our mind. How can we reconcile this contradiction? We are deemed by the law to be capable of holding full and unmitigated rights to the PRODUCTS of our brain activity, to the recording and documentation of our brain waves. But we hold only partial rights to the brain itself, their originator.

This can be somewhat understood if we were to consider this article, for instance. It is composed on a word processor. I do not own full rights to the word processing software (merely a licence), nor is the laptop I use my property – but I posses and can exercise and enforce full rights regarding this article. Admittedly, it is a partial parallel, at best: the computer and word processing software are passive elements. It is my brain that does the authoring. And so, the mystery remains: how can I own the article – but not my brain? Why do I have the right to ruin the article at will – but not to annihilate my brain at whim?

Another angle of philosophical attack is to say that we rarely hold rights to nature or to life. We can copyright a photograph we take of a forest – but not the forest. To reduce it to the absurd: we can own a sunset captured on film – but never the phenomenon thus documented. The brain is natural and life’s pivot – could this be why we cannot fully own it?

Wrong premises inevitably lead to wrong conclusions. We often own natural objects and manifestations, including those related to human life directly. We even issue patents for sequences of human DNA. And people do own forests and rivers and the specific views of sunsets.

Some scholars raise the issues of exclusivity and scarcity as the precursors of property rights. My brain can be accessed only by myself and its is one of a kind (sui generis). True but not relevant. One cannot rigorously derive from these properties of our brain a right to deny others access to them (should this become technologically feasible) – or even to set a price on such granted access. In other words, exclusivity and scarcity do not constitute property rights or even lead to their establishment. Other rights may be at play (the right to privacy, for instance) – but not the right to own property and to derive economic benefits from such ownership.

On the contrary, it is surprisingly easy to think of numerous exceptions to a purported natural right of single access to one’s brain. If one memorized the formula to cure AIDS or cancer and refused to divulge it for a reasonable compensation – surely, we should feel entitled to invade his brain and extract it? Once such technology is available – shouldn’t authorized bodies of inspection have access to the brains of our leaders on a periodic basis? And shouldn’t we all gain visitation rights to the minds of great men and women of science, art and culture – as we do today gain access to their homes and to the products of their brains?

There is one hidden assumption, though, in both the movie and this article. It is that mind and brain are one. The portal leads to John Malkovich’s MIND – yet, he keeps talking about his BRAIN and writhing physically on the screen. The portal is useless without JM’s mind. Indeed, one can wonder whether JM’s mind is not an INTEGRAL part of the portal – structurally and functionally inseparable from it. If so, does not the discoverer of the portal hold equal rights to John Malkovich’s mind, an integral part thereof?

The portal leads to JM’s mind. Can we prove that it leads to his brain? Is this identity automatic? Of course not. It is the old psychophysical question, at the heart of dualism – still far from resolved. Can a MIND be copyrighted or patented? If no one knows WHAT is the mind – how can it be the subject of laws and rights? If JM is bothered by the portal voyagers, the intruders – he surely has legal recourse, but not through the application of the rights to own property and to benefit from it. These rights provide him with no remedy because their subject (the mind) is a mystery. Can JM sue Craig and his clientele for unauthorized visits to his mind (trespassing) – IF he is unaware of their comings and goings and unperturbed by them? Moreover, can he prove that the portal leads to HIS mind, that it is HIS mind that is being visited? Is there a way to PROVE that one has visited another’s mind? (See: “On Empathy”).

And if property rights to one’s brain and mind were firmly established – how will telepathy (if ever proven) be treated legally? Or mind reading? The recording of dreams? Will a distinction be made between a mere visit – and the exercise of influence on the host and his / her manipulation (similar questions arise in time travel)?

This, precisely, is where the film crosses the line between the intriguing and the macabre. The master puppeteer, unable to resist his urges, manipulates John Malkovich and finally possesses him completely. This is so clearly wrong, so manifestly forbidden, so patently immoral, that the film loses its urgent ambivalence, its surrealistic moral landscape and deteriorates into another banal comedy of situations.

Putting the Da vinci code books to the big hollywood screen: a must see or the blasphemous of the legend