What Do You Remember About The Donny And Marie Talk Show? 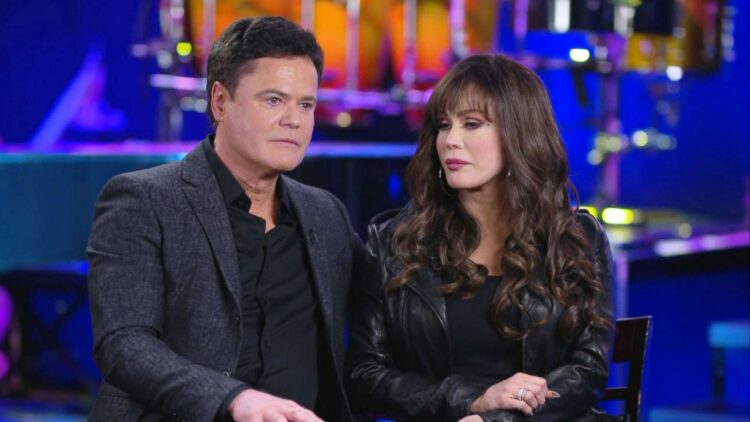 She was a little bit of country. He was a little bit of rock and roll. Together, they were a whole lot of ridiculous. And somehow, through the magic of over-the-top musical numbers, phenomenal guest stars, and painfully kitschy acting skills, Donny and Marie Osmond captured the attention and hearts of the entire nation. While The Donny and Marie Show of the late seventies only lasted a handful of seasons, their outrageous prime-time antics have made a lasting impression on TV viewers of any generation.

The Donny & Marie Show was created by Sid and Marty Krofft, the famed creators of other such offbeat television programs as H.R. Pufnstuf and Land of the Lost. It aired from January 1976 to May 1979 as a weekly on ABC and featured such famous guest stars as Redd Fox, Lucile Ball, Betty White, Jerry Lewis, and Milton Berle. The format usually consisted of an elaborate opening act followed by a series of comedy sketches and an even more elaborate closing musical number. But for all the campy scripts and synchronized dance routines, the real stars of the Donny & Marie Show were, without a doubt, the costumes.

The 1977 Christmas special episode is a great example of Donny and Marie’s ability to balance cutesy-poo costumes on that thin line between adorable and nauseating. Donny kept it simple; dressing in a matching white knit sweater and slacks combo with a red, white, and green striped scarf, he wasn’t afraid to say to the world, “Hi! I’m Donny Osmond! I taste like spearmint!” Marie made bolder choices in her winter finest with what looks to be a one-piece bodysuit but, upon closer inspection, turns out to be a sweater and stretch pants that are just slightly different shades of green. What makes this episode so memorable costume-wise is the fact that the entire Osmond family was featured –Mother, Father, the small army of twenty-eight that is the rest of their immediate family– and they all match. I’m not sure who was in charge of coordinating outfits for that episode, but my hat certainly is off.

Another interesting costume extravaganza was the episode in which Marie celebrated her 18th birthday. In this episode, Marie and Donny sing their familiar weekly number, “I’m A Little BIt Country, I’m A Little Bit Rock-and-Roll”, but this time — gasp! — they switch lyrics! That’s right! And what kind of dramatic turn events would it be without ridiculous costumes. Both Donny and Marie sport matching silver outfits. Donny has a faux-western theme going on, while Marie looks like she just got back from touring with David Bowie. Marie also has an enormous new hairdo or, as Donny refers to it, a “hair don’t.”

Donny and Marie didn’t stop at matching scarves and silver jumpsuits, though. In one episode, Donny portrays a superhero character known as Captain Purple, wearing an oversized purple muscle suit and wig and, as his mild-mannered alter-ego, a flannel suit. Not to be outdone, Marie suits up herself as Gnidder Neleh (Helen Redding spelled backward) in an equally campy red-orange mini-skirt and wig.

Star Wars being the cultural phenomenon that it was, it only made sense that Donny and Marie would have to do a parody of it. Donny plays Luke and Marie plays Leia with such guest stars as Redd Fox, Kris Kristofferson, Paul Lynde, and a few of the Osmond brothers. The costumes were polished, Osmond-style variations of the originals; unfortunately, C-3PO ends up stealing the show.

The best costumes of the entire series, however, belong to the famous Wizard of Oz episode. Marie plays Dorothy in a red checkered dress and pigtails, Donny is a Willy Wonka-esque Wizard in a yellow-green, curly wig and sparkling fez hat, and Paul Lynde is a downright terrifying Wicked Witch of the West in full green face paint, black gown, and gruesome fingernails. Additional victims…err, guests…of this episode include Lucille Ball as the Tin Man, Paul Williams as the Cowardly Lion, and Ray Bolger as the Scarecrow. The entire production is technicolor bizarre; the epitome of classic Donny and Marie.

While the show did indeed host a laundry list of Hollywood greats, the real stars weren’t the people on the stage but the clothes on the people. From platform shoes and bellbottoms to capes and ice skates, Donny and Marie weren’t afraid to let their clothes pick up where their own talent left off. And while some may find The Donny & Marie Show silly and outdated, one thing is for sure; there hasn’t been anything like it on television since. Wardrobe-wise, that is.