The top rated Valentines day movies back then: the all in one movie review of “PS I Love You” 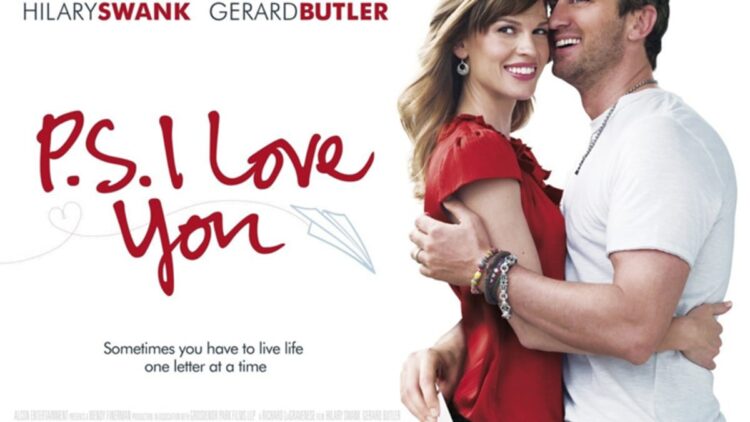 While nobody can predict when death will pay them a visit and cut their life short, according to the movie P.S. I Love You, with some applied imagination and strategic planning in advance, you might be able to cheat the Grim Reaper just a little. Or in this case at least, from beyond the grave.

Not that this morbid premise sounds like ideal material for a fanciful romantic comedy. But filmmaker Richard LaGravenese (The Fisher King, The Bridges Of Madison County) takes up the challenge of juggling this life and the next for laughs, and awkwardly negotiates an often less than plausible common ground between the best of both worlds, such as they may be.

Hilary Swank and Gerard Butler are Holly and Gerry in P.S. I Love You, a stressed out young Manhattan couple into marriage meltdown at the moment, as they brawl verbally about Holly’s tendency towards too much shopping, not enough ‘hot, nasty sex’ on their weekly to-do list, Gerry’s unsexy slacker attitude toward vocational ambition, whether or not they forgot to have children along the way, and might this be very well all that there is out of life. In the midst of Holly’s nightly nagging and lingering doubts about their relationship, happy-go-lucky Irish rocker import Gerry suddenly kicks the bucket. Which leaves Holly in a deep funk of guilt-ridden regret and inconsolable misery.

While concerned mom Patricia (Kathy Bates) and caring best girlfriends Denise (Lisa Kudrow) and Sharon (Gina Gershon) have no success getting Holly to dispel those full-time blues, the sudden, mysterious delivery of a series of letters from late hubby Gerry, slowly work their magic in snapping their glum gal pal out of her depressed state. The letters function like a 12-step program presumably mailed from the afterlife, nudging the stricken widow back to normalcy and even a little potential new romance. The tragicomic healing process culminates in no less than two trips back to Ireland where the couple first met, where Mom and Holly embark on a weird adventure together, to go pick up men.

P.S. I Love You and its dead letter collection plot device is far too overdone, and feels dramatically energy-inefficient and contrived to begin with. Much more effective is LaGravenese’s sensitive physical and emotional layering of the complex unraveling of grief as a state of mind. And Swank gets it just right with a fine-tuned subtle expression of confusion, despondency and rage, though Holly’s overly extended cranky self-pity party eventually wears out its welcome, for the characters and audience alike.

And it never quite makes sense why Holly isn’t turned on by the persistent advances of the infatuated hunk played by Harry Connick Jr., even if the guy’s on the eccentric side, as when he invades her private space in the local pub’s john to present her with the heart he wears a little too prominently on his sleeve. In any case, P.S. I Love You could have done with a lot less of a sense of being on rewind as each posthumous letter arrives, and every time a romantic urge or mental mood swing gets reshuffled.

The laugh out loud movies that you should not miss: exploring the top 10 comedy monty python movies

Looking for some best movie series to binge? Try the golden compass series on the big screen at the weekend