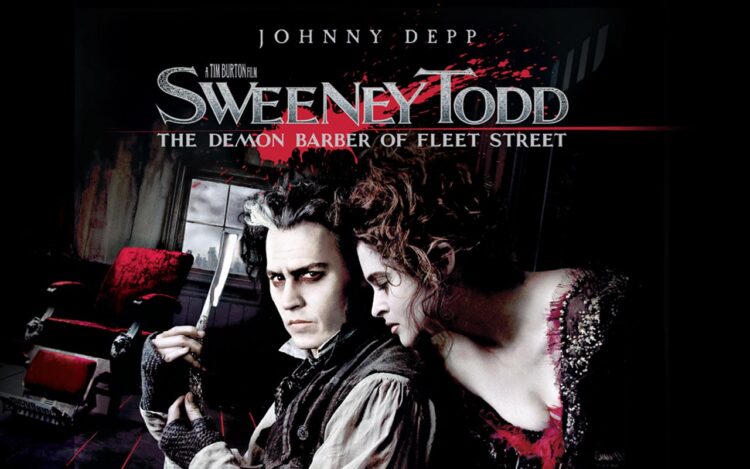 Having never seen the stage version of Sweeney Todd: The Demon Barber of Fleet Street, I can’t speak to the fidelity the film shares with the play. That said, let there be no doubt that Tim Burton has crafted a true piece of musical cinema from Stephen Sondheim’s bloody masterpiece. To their discredit, early previews have hedged a bit regarding the singing in the film. In them we only see Johnny Depp canting some recitative as he prowls the streets of London. While this scene is certainly in the movie, it’s barely representative of the actual film which contains at least a dozen fully-staged numbers and only intermittent dialogue.

As the former Benjamin Barker, Depp is magnificent as Todd. His voice may lack the thunder that would be expected on stage, but on the big screen it’s more than suitable. Purists may find it a little ragged and flat at times–Michael Crawford needn’t worry about Depp–but it’s an ideal manifestation of the corrupting anger and rotting vengeance that fill Todd’s soul. The same can be said for Helena Bonham Carter as the fiendish Mrs. Lovett. Sure she will occasionally descend into something approaching a hectoring screech, but consider for a moment that she’s a baker who grinds people into meat and serves them up in piping hot pies!

Voices aside, both actors deliver rich, complex performances. The focus and intensity that Depp brings to his role is riveting. Within minutes of the film’s opening there is no doubt that Depp will have his revenge and have it with gusto. Taking a step back from the film, realize that Todd is a thoroughly despicable character. He often kills indiscriminately, but Depp is so powerful as Todd that you eventually begin to relish his countless murders. Carter’s Mrs. Lovett is, perhaps, even more of a psychopath. Slicing a throat is one thing. Butchering a man and then serving him up for dinner is quite another. Nevertheless, you delight in her, too.

As for the killings, Burton stages them in spectacularly gory fashion. The phrase ‘geysers of blood’ is often used casually when describing a violent film. In Sweeney Todd the phrase is explicitly correct. Depp is often obscured under the high-powered jets of plasma that repeatedly erupt from his customer’s necks. Amazingly, these scenes aren’t even the most disturbing. Once Todd finishes giving a ‘shave’, he dumps the corpse down a hole where it cracks loudly at the bottom as the skull splinters and the neck breaks cleanly. It’s all completely over the top and, of course, wonderful, hilarious, inspired.

The same can be said for the film as a whole. In Sweeney Todd, Tim Burton has found material that meshes perfectly with his artistic sense. You could call it a horror film or a screwball comedy and you’d be right both times. The design is, as would be expected from a Burton picture, lavish and spectacular. The supporting cast, especially Alan Rickman and Timothy Spall, are superb. Only the love story between Johanna and Anthony falls a little flat. It’s a minor quibble, though, in an otherwise outstanding film. Sweeney Todd joins Ed Wood and Edward Scissorhands as Burton’s finest work. It may eventually even be considered his best.

Parents Of Famous Child Actors Have To Know: The Quick Start Guide Of Dominating In The Domain Name Search